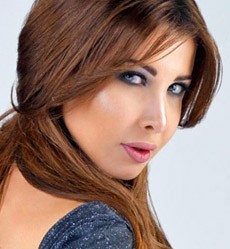 Nancy Ajram is a successful Arabic pop singer from Lebanon.


Nancy Ajram (pronounced Nancy Agram in Egypt) was born on the 16th of May 1983 in Ashrafiyeh, Lebanon. Nancy Ajram has two siblings also involved in Arts. Her brother, Nabil Ajram, is also a singer. Her sister, which bears similar features, is an actress.

Around the age of twelve, Nancy Ajram participated in a TV program called (Noujoum Al Mostakbal) which aired on Future TV (One of Hariri's Media Outlets). Nancy won the Golden Medal in Tarab category for singing one of Umm Kulthum's songs, a highly regarded legendary Egyptian Tarab singer.

Still a young dorky looking kid, Nancy Ajram released her first album entitled (Mouhtagalak - I need you) in 1998. In 2001, she launched her second album (Shil Oyounak Ani - Stop looking at me ). These two albums were somewhat flops, mostly because Nancy lacked proper management. Her choice of songs was outdated, and her image quite unappealing!

Nancy had a good voice and a solid singing technique, but no one saw much in her nor expected her to one day become an icon in such a tough Industry...except for one clairvoyant man! When Nancy Ajram met with Jiji Lamara, an experienced producer and manager, her fate was about to change. Jiji Lamara was a professional strategist that understood the hidden keys for success. Nancy underwent a full image change to become a sexy young girl. Nancy also ranked fifth in Top 100 Sexiest Arab Women 2010.

In 2003, the transformed Nancy Ajram rose to instant fame with her hit single (Akhasmak Ah) and the release of her third studio album, Ya Salam ("How Beautiful") which was a best-seller in the Arab World (a first for Nancy). Nancy's success was partly due to the collaboration with the exceptional director Nadine Labaki, responsible back then for the emergence of new generation of high quality music videos in the Arab World. Together, they created some of Nancy's best work including "Ya Salam" and "Sehr Ouyouno". A sassy cafe waitress in Egypt, a go-go dancer in a French Cabaret, a hairdresser in Beirut, Nancy did it all. At one point one could find Nancy Gallabiyas being sold in Cairo’s souks! That same year, Nancy won Best Arab Singer 2003 at the Oscar Video Clip Festival Sharm El Sheikh.

Advertisers immediately saw the potential in that and product placement became a regular thing in Nancy Ajram's following videos. She also signed-up with Coca-Cola to become their official celebrity spokesperson for the Levant, Arabia and North Africa regions; and shot a number of Coca Cola TV commercials and prints. Later, Nancy also became the Image de Marque for Damas Jewellery in the Arab World.


In 2004, Nancy Ajram released her equally successful fourth album (Ah we Nos), and shot three music videos, (Loun Eyounak) , (Ah we Nos) and (Inta Eh)also under the direction of Ms. Labaki. Nancy was unequivocally the number one female star in the Arab music industry!

In the mean time, Nadine started working on her first long movie Caramel. Nancy filmed with her one last hit from her new album (Ya-Tabtab Wa-Dallaa), before collaborating with other directors like Said el Marouk. By then, Nancy's image was starting to change; her previous sexy image turned into a subtle girl next door look, then into that of a child-like girl in her early teens. This is when Nancy released her children's album Shakhbat Shakhabit (Scribbled Scribbles).

In 2008, Nancy Ajram released her 7th album, (Betfakkar Fi Eih), which won her the World Music Award. In September of that year, Nancy also married Dr. Fadi Hachem after a three year affair. On May 16, 2009, Nancy gave birth to her daughter Mila.

The same concept was repeated in 2010 on the occasion of the World Cup, in a duo with K'naan called Shagga b3alamak, an Arabic version of his song Wavin' Flag. The song was chosen as Coca-Cola's promotional anthem for the 2010 FIFA World Cup, held in South Africa. K'naan is a Somali-Canadian musician. The remix of "Wavin' Flag" was part of Coca-Cola's global integrated marketing campaign "inspired by the joyous dance celebrations familiar to Africa." K'Naan's "Wavin' Flag" was used as the music element throughout the entire campaign including as the soundtrack on all global Coca-Cola TV commercials for the soccer tournament. K'naan: "We took something like 50 drums and did this crazy mix for it. It's about the one time that we all get together and the world forgets its conflict and its problems and we focus on this unity and celebration."

In September of 2010, Nancy goes back to the source with Album Nber 7. She sets aside her recently adopted girly image and reunites with the people who contributed to her earlier success. After a long break from video directing, Labaki gives Nancy her yet another music video that also happens to feature the same model from before Saleh Abdel Nabi.

In 2006, a Nancy Laser Hair Removal Video was leaked to the public.

Help us improve this page:   Correct or update the Nancy Ajram page