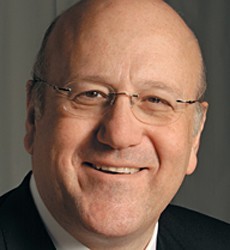 His full name is Najib Azmi Mikati, and he was born on the 24th of November 1955. He is married, with 3 children.

On the 15th of April 2005, President Émile Lahoud appointed Najib Mikati as the Prime Minister of Lebanon.

Najib Mikati took the seat from Omar Karami, who regisgned after 7 weeks of failed efforts to make a consensus government.

Najib Mikati was a Prime Minister for Lebanon for a period of three months, he gave his seat to Fouad Siniora on the 19th of July 2005.

Najib Mikati often appears on Forbes list of richest and most successful billionaires of the world. With a net worth of more than $2.6 bil., he ranked #407 in 2007, and #446 in 2008. His main fortune comes for telecommunications services.

Najib Mikati studied at the American University of Beirut Lebanon, where he received a Bachelor of Arts & Science,and a Masters in Business Administration. He founded the telecom company Investcom with his brother at height of Lebanon's civil war in 1982. He thrived in challenging, underpenetrated markets, including Sudan, Liberia, Yemen. He sold his company in June 2006 to South Africa's MTN Group for $5.5 billion. With his brother and business partner, Taha, he recently funded public policy studies fellowship at University of Chicago.

In January 2011, the name of Najib Mikati circulated as a potential candidate for the seat of Prime Minister in the next Lebanese government, replacing former PM of Lebanon Saad Hariri.


Help us improve this page:   Correct or update the Najib Mikati page