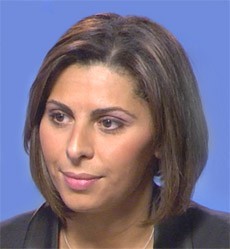 Nabila Ramdani is a famous French Algerian journalist. She writes topics related to the Middle East especially covering issues related to Anglo-French and Islam. She has a special interest in covering the news from Iraq, Yemen, Afghanistan and Pakistan.

Nabila Ramdani has written many articles in major newspapers and magazines such as: Daily Telegraph, The Guardian, New Statesman, Sunday Telegraph, Daily Mail and Sunday-Times.

In 2010, Nabila Ramdani won the inaugural European Muslim Woman of Influence - EMWI Award. In that same year, she also got nominated for the EU Journalist Award (Together Against Discrimination).

On Television Ramdani is a known commentator for the Woman's Hour on BBC, Al-Jazeera Television, France Inter, Canal +, and many more.

Help us improve this page:   Correct or update the Nabila Ramdani page