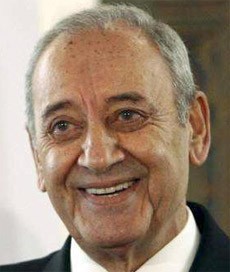 Nabih Berri was born on the 28th of January 1938 in Bo, Sierra Leone to Lebanese parents.

Berri had his early studies in Tebnine and Ain Ebel in the south of Lebanon.

In the year 1963, Nabih Berri obtained a law degree from the Lebanese University.

At the university, Nabih was the student body president.

Nabih Berri became a lawyer at the Court of Appeals in Lebanon.

During the sixties Nabih Berri joined the Arab Nationalist Movement and later created the Amal Movement.

Help us improve this page:   Correct or update the Nabih Berri page