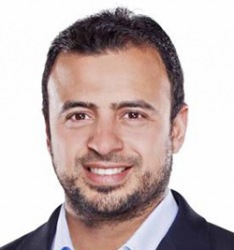 Mustafa Hosny Abdessalam is an Egyptian Islamic preacher, known for his televised teachings that air on Iqraa TV.

Mustafa Hosny (also spelled Hosni) was born on 28 August 1978. He is married and the father of two children, Ali and Hanaa. He earned a business degree at the University of Ain Shams University in Cairo, followed by a Certificate of Achievement from the Egyptian Institute that prepares preachers.

Help us improve this page:   Correct or update the Mustafa Hosny page