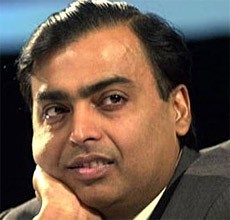 Mukesh Ambani is an indian businessman and one of the wealthiest men on earth, he is ranked as the sixth richest man. Mukesh was born on the 19th of April 1957 in Yemen.

Mukesh Ambani has a net worth of approximately $20.8 billion. He is the chairman, managing director and the largest shareholder of Reliance Industries, India's largest private sector enterprise and a Fortune 500 company.

His personal stake in Reliance Industries is 48%. according to Forbes Mukesh Ambani wealth is estimated at around US$21 billion which makes him the richest man in Asia.

Dhirubhai Ambani was the founder of Reliance Industriesis and the father of Mukesh and his younger brother Anil Ambani.
It is worth noting here that Mukesh Ambani owns the Mumbai Indians Premier League Team.

Mukesh Ambani is married to Nita Ambani, who looks after the social and charitable arm of Reliance Industries. They have three children: Akash, Isha and Anant.

Mukesh Ambani is currently building the world's most expensive home (valued at $2 billion). This will be a 60-story skyscraper (with only 27 floors) in downtown Mumbai. It may be called Antilia.He is a business tycoon .

Help us improve this page:   Correct or update the Mukesh Ambani page