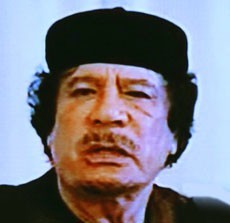 Muammar Al Gaddafi also known as Mu-ammar El Qaddafi is the president and Leader of Libya since his successful military coup in 1969.


Muammar Al Gaddafi was born on the 7th of June 1942), commonly referred to as El Qadafi a word which means in the Arabic language The Guide or the The Big Brother Leader.

In the year 1977, Muammar Al Gaddafi published his political philosophies in the Green Book and renamed the Libyan Arab Republic to Al Jamahiriya Al Libiya.

Two years later, Muammar relinquished the title of prime minister, and got accorded as the Brotherly Leader. He had also been named as The Guide to the First of September Great Revolution of the Socialist Libyan Arab People Jamaheriya.

In February of 2011, and after 42 years of ruling Libya, the people started to wave of protests against their leader. The Libya Protests were inspired by similar demonstrations in Tunisia and Egypt. This public uprising against the Gaddafi regime was very strong and led to Ghadaffi killing thousands of people.

On the 26th February 2011, Gaddafi was reported as having lost control of much of the country.

In the early month of March 2011, he returned to more stately places in Tripoli from a hideout, and ordered his supporters to go north and take control of Benghazi from the opposition.

In the end of March 2011, the NATO announced a no-fly zone over Libya and made sure that Ghadaffi was losing his grounds.

Help us improve this page:   Correct or update the Muammar Al Gaddafi page