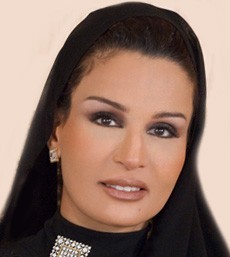 Sheikha Mozah bint Nasser Al Missned is to Qatar, what Queen Rania is to Jordan. Her highness represents the beautiful face of diplomatic Qatar and its modern development. She is sheer sophistication, elegance and class! ‘Hors competition’, like would say the French.

Mozah bint Nasser is one of the few monarchical wives in the Arab World to be actively involved in the socio-political issues of her country and the region. In 1977, she married Sheikh Hamad bin Khalifa Al Thani Emir of the state of Qatar (at the time Crown Prince). She is the second of his three wives, and has seven children (five sons and two daughters).

Her Highness Sheikha Mozah has long served as President of the Supreme Council for Family Affairs in Qatar. She is also the Chairperson of Qatar Foundation for Education, Science and Community Development; a private non-profit organization founded in 1995 on the personal initiative of His Highness the Emir Sheikh Hamad. Among other projects, she inaugurated Education City, a prototypical campus that brings branches of renowned international universities to Qatar. In 2003, the UNESCO appointed her Special Envoy for Basic and Higher Education, for her efforts to improve the quality and accessibility of education worldwide, especially in conflict areas such as Iraq, Afghanistan and Gaza. Later in 2005, she became Member of the High Level Group of the UN Alliance of Civilizations.

Sheikha Mozah was also appointed Vice Chair of the Supreme Health Council in April 2009. The Council is responsible for health care policy and regulation in Qatar. She is also the Chairperson of Silatech, an initiative that deals with youth employment in the Middle East and North Africa region.
Sheikha Mozah has flown on diplomatic trips and VIP social gatherings all around. On July the 31st of 2010, she accompanied Emir Sheikh Hamad to Bint Jbeil -South Lebanon, a village they helped rebuild after it had been completely destroyed during the Israeli aggressions on Lebanon in 2006. They were received by official figures (Lebanese president Michel Suleiman, Prime Minister Hariri, and Speaker of Parliament Nabih Berri), but also affectionately welcomed by popular celebrations organized by the southerners.