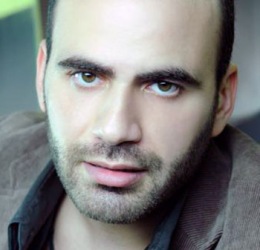 Moussa Atallah is a Lebanese singer mostly known as Moussa the singer. He was born on the 30th of October 1980 in Beirut, Lebanon.

As a child, he showed great passion and talent for music and singing. Moussa's father found out that his son has a beautiful voice and Marcel Khalife encouraged the Atallah family to enroll Moussa in the Lebanese Music conservatory to develop his talent. At the age of 4, he was the youngest child to learn the Oud instrument at the music school. A that time, Said Salam, former member of Farid Al Atrash's orchestra, was his mentor.

At a later stage, he continued his studies with Charbel Rouhana, to study afterwards the art of oriental music. Moussa led his way away from fame, he sang at school's ceremonies and village festivals, to finally master, after years of hard work and preparations, what he started as a child. He created an artistic image that reflects his emotions and personal vision.

Moussa released his first single, in 2009, entitled "Nafs El Makan", written by Mounir Abou Assaf, composed by Wissam Boustany and distributed by Toni Abu Khalil. It stayed at the first position in the Lebanese Chart for more than 7 weeks. Its video was directed by Fadi Haddad, it portrayed a romantic love story and tackled the issue of people with special needs, specifically those who lost their sight.

"Nafs El Makan" was broadcasted on many Arabic TV channels. In 2010, Moussa released "El Hob Biinayna" which was directed by Bashir Hadad. This time, it attempted the problem of drug addiction. The video grabbed the attention of media, for instance Marcel Ghanem shed the light on this issue during his evening talk show Kalam El Nas and encouraged Moussa for taking the initiative.

Moussa also took part at the world conference to decrease drug dangers in its 22nd cycle. He admitted that he once fell in love with a girl who happened to be an addict.Today he regrets leaving her and considers "El Hob Biinayna" a public reconciliation with that experiment. It is to be noted that this video clip was broadcasted on BBC in a investigation report about drugs.

Furthermore, He released in (2011) a song for kids titled "El Bent El Amoura", written by Mounir Abu Assaf, composed by Wassim Boustani, and distributed by Toni Bou Khalil. Bashir Haddad directed the video clip that was shot as 3D, featuring cartoon characters. After the release of the clip Moussa was honored by the Lebanese Child Community in Hazmieh, and was privileged by Randa Bery as well after taking part in the "Happy Day" with the children of Nabih Bery' center in Sarafand.

Help us improve this page:   Correct or update the Moussa Atallah page