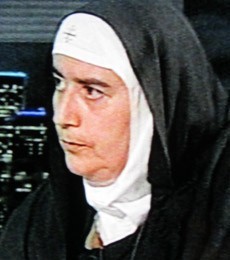 Mother Agnes Mariam of the Cross

Mother Agnes Mariam of the Cross is a controversial Lebanese-Palestinian catholic figure, based in Syria.

Mother Agnes Mary of the Cross, also known as Al Oum Agnès Mariam el Salib, or Mère Agnès Marie de la croix, is the mother superior of the monastery of James the Mutilated in Qara (Syria). Although she is Lebanese from Palestinian descent (from her father), she has served in Syria for more than 18 years.

Mother Agnes is the spokesperson of the Catholic Information Center in Beirut. She headed a visit to Syria in November 2011, organized with the collaboration of the foreign press, touring and briefing on what's happening on the ground in the areas of conflict. She was an eye witness and a translator for the western media, that reported the critical situation in some parts of Syria, where armed gangs (some of whom were not even Syrian, coming from Saudi Arabia and other neighboring countries)were causing havoc and terrorizing the Syrian people who do not take part in protests against the regime. Many citizens were dealt with in the most barbaric ways, for not complying with their demands. She visited the families of the victims there to assess the situation and empathize with those suffering from the tragic situation. She also visited the hospitals etc. A number of correspondents of foreign news agencies from Italy, Belgium, France, Spain and the United States, took part in the first mission of its kind to enter into such sensitive places.

Because of that, Mother Agnes Mariam of the Cross was placed on the online black list sponsored by extremist factions along with facebook groups supporting the Syrian National Transitional Council . She was also accused of being a recruited intelligence spy for the Syrian regime, an accusation she categorically rejects.

Al Oum Agnès Mariam el Salib is also part of those opposing the western plan that seeks the expulsion of Christians from the Middle East, that would result in ethnic and religious cleansing of the region, turning it onto cantons of extremism .A press campaign in Europe, including in Italy, accused her along with the Christians of the Orient of collusion with the dictatorships. In an interview in October 2011 with Thierry Meyssan,( a French intellectual, founder and chairman of Voltaire Network and the Axis for Peace Conference), Al Oum Agnès expressed her disappointment with the Catholic press which blindly follows what is dictated by the masters of the world and that just repeats like a parrot what the mainstream media spreads. She also called for the end of the New Western Colonialism, starting with the plot of the international community to establish an alternative puppet regime in Syria like was done in Libya.

Mother Agnes Mariam of the Cross has received a lot of support by the Syrian people, especially the Arab nationalists who still believe in one united strong Arab "umma" where all the different ethnic and religious elements can live together in one beautiful harmony. Her recent TV appearances on talk shows got high viewing ratings, as people demanded to see and hear more of her...

Help us improve this page:   Correct or update the Mother Agnes Mariam of the Cross page