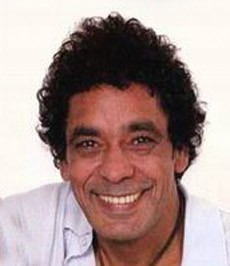 Mohamed Mounir is a famous Egyptian singer and actor.

Mohammad Mounir was born on the 10th of October 1954 in Aswan, Egypt.

His pop-oriented music has its roots in the various genres of traditional Egyptian and African music Also Reggae, Jazz and Nubian music.

Mohammad Mounir sings mostly political and social songs, his style of singing is more of a pop-oriented traditional style from Egypt. Mounir songs are considered are very important, she has fans from all over the world.

Mohammad Mounir appeared in dozen egyptian movies such as Dunia which means the World and Al Maseer which means Destiny, a famous movie directed by Youssef Chahine.

Help us improve this page:   Correct or update the Mohamed Mounir page