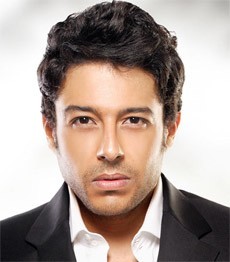 Mohamed Hamaki is a famous Egyptian young singer, his full name is Mohamed Ibrahim Hamaki. He was born in Cairo, on the 4th of November 1975.

Mohamed Hamaki first appeared to public through his first song entitled "Al Helw Yehib El Heneya" a song which was released in a variety album called Lekaa Al Nugoom with other rising artists in 1996. The album was the work of Hamid El Shari who discovered and introduced Hamaki to the music business and to the public.

Mohamed Hamaki first album was entitled Khallena Neesh which means Let us Live, the album was released in the year 2003, it included ten great songs, arranged by the arranger Tarek El Madkour.

Mohamed Hamaki first video clip was for his song Betedhak, it recieved a lot of good feedback.

Hamaki stayed nearly 2 years after the release of his first album that is produced by DeltaSound, until he released his single Yana Yanta (Me or You) and made it as a videoclip.

rumors said that he wanted to break up with audio producer Tarek Madkour and to start working solo on his own music with his same producer Nassif Kauzman the owner of DeltaSound.

Such rumors have been denied as Madkour himself who wrote on his site that he will be working with Hamaky on his new album.

Help us improve this page:   Correct or update the Mohamed Hamaki page