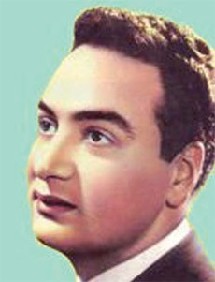 Mohamed Fawzi is a famous Egyptian classical singer who was born in the year 1918, he died in the year 1966.
His full name is Mohammed Fawzi Elhaw, he was not an ordinary singer, after his dealth he left a mark in the egyptian and arab music history. In addition to being a great singer, Mohamed Fawzi was a music composer.

Mohammad Fawzi learned how to play the flute at an early age, he then studied in Cairo, while trying to look for a chance to sing anywhere in the big city.

His first attempt was to work with the well known names such as Badiah Massabni and Fatma Rushdi.
Mohamad Fawzi had a special interest in children songs, he composed and sang many of them throughout his career.

Help us improve this page:   Correct or update the Mohamed Fawzi page