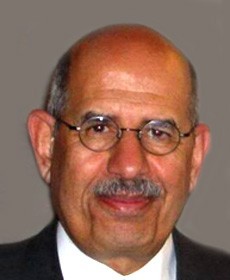 Mohamed Al Baradey was the Director General of the International Atomic Energy Agency - IAEA from December 1997 till November 2009. He is possibly the future president of Egypt.

The IAEA is an inter-governmental organization under the auspices of the United Nations. In 2005, both the IAEA and ElBaradei were awarded the Nobel Prize for Peace.

His full name is Mohamed Mustafa ElBaradei and he was born on the 17th of June 1942 in Egypt.

In 1974, Mohamed ElBaradei received a PhD in International Law from the New York University - Law School.

Elbaradei proved to be a thorn to the George W. Bush administration, as he was one of the first and most influential figures to question the invasion of Iraq and the its real intention behind it.

In the month of January 2011, and as the protests in Egypt against president Hosni Mubarak increased, Mohamed Elbaradei stepped up among the other activists to cease the momentum and secure a place as next potential president of Egypt. He claimed to have been placed in house arrest by officials, to restrain his actions. Although his arrival boosted the already strong manifestations, activists in the opposition (such as Essam al-Arian) made sure to credit the mini-revolution to the people of Egypt, especially the younger generations who mobilized themselves through new technological means like the internet. To note that the mass protests were initiated by April 6 Youth Movement Egypt.

Mohamed Elbaradei had previously expressed his desire to become president, and a special unit was created to support his candidature called National Association for Change (NAC), which regroups numerous prominent activists such as George Ishak. During the latest protests, he also expressed his interest in heading a transitory national unity government which will precede the next presidential elections.


Help us improve this page:   Correct or update the Mohamed Elbaradei page