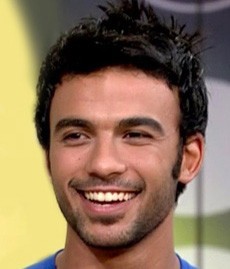 Mohamed El Maghraby is a male singer from Egypt who participated in Star Academy 7 with the name of Mohamad Ali.

His full name is Mohammad Mustafa Abd Al Hamid Ali Al Maghraby. He was born on the 22nd of May 1988 in Egypt.

El Maghraby graduated in the year 2009 with BA degree in Archaeology from the Higher Institute of Archaeological Renovation.

Mohamed El Maghraby is holder of the title Arab Boy Next Door 2010, and ranked 3rd in the official Top 100 Sexiest Arab Men 2010 list.

Mohammad started his career in music by leading a small boy-band in Alexandria, Egypt. The band focused on writing music and singing songs for the youth.

During his participation in Star Academy 7, Mohamed performed very well. He was nominated during the Eighth and the Eleventh prime of season seven.

Mohammad has a big potential and strong charisma. He is on his way to becoming a pop star on the Egyptian and the Arab level.

Help us improve this page:   Correct or update the Mohamed El Maghraby page