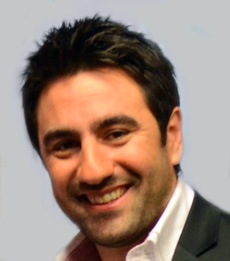 Michel Hourany also known as Michel Hourani is a Lebanese Actor and Television presenter. In addition to being an actor, Michel Hourany is a Communication Trainer, a Drama instructor at the AUST in Beirut and a Theater director. Hourany was born on the 13th of February in the village of Marjeoun in South Lebanon. On the 5th of May 2005, Michel Hourany got married to Sally Abou Jaoude. His first appearance was in 2006 when he played the role of "Nino" in the Lebanese movie Falafel, starring Lebanese beauty Gabrielle Bou Rached.

In 2010, Michel took role in the Lebanese TV series "Al Shahroura" which narrates the life of Lebanese legand Sabah singer. The series was directed by Egyptian Ahmad Shafik and produced by Cedar Art Production.

In 2011, Hourani invited people to participate in Beirut Chants events, to pray, to chant, to enjoy the moments of music and arts.

Michel Hourany holds a Masters degree in Visual and Performing Arts from USEK. He also holds a Bachelor degree in Dramatic Arts from the Lebanese University.

In 2011, Michel Hourany played the role of "Samer", the son of a rich person, who is married to "Reem" played by Nelly Maatouk in the Lebanese Drama "Ayleh Matoub Alaya". His character is torn between his lover and his wife. The TV series stars Hiyam Abou Chedid Hjeily and Yvonne El Hachem who had added her voice and character to this drama via acting and singing. This Drama was written by Marwan El Najjar and aired on Murr Television - MTV.

In 2012, He played a role in the Lebanese Series "Tahlik Al Nousour" which aired on LBCI and starred Ammar Chalak, Walid El Alayli, Jessica Nassar and Wafaa Tarabay.

In 2013, Michel Hourany took role in the Lebanese TV series "Dahaya El Madi" with Nada Abou Farhat. The TV series was directed by Toni Farjallah and written by Claude Abou Haydar, It was aired on LBCI.

Some of his other work in Television includes: Maleh Ya Bahr, Bayn El Sama Wal Ard and Familya. In Theater he took role in Kama Fee Ala Al Ard, Qama Fil Yawm Al Thaleth. Saet Wafa and Hallak Dawrak are some of the Television program he presented on TeleLiban.

Help us improve this page:   Correct or update the Michel Hourany page