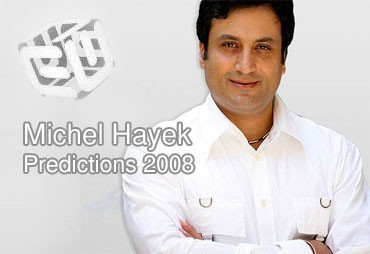 Michel Hayek boycotts LBC & Predicts for the 2008 on NewTV

The pop star of all fortune tellers Michel Hayek has bestowed upon us his latest predictions. In breach of his usual exclusive yearly appearance on LBC, he was received this time around 2 months earlier on NewTV, a competing channel.

First Tony Khalifeh, now Michel Hayek Could it be that LBC is losing grounds to NewTV?!

Given that the predictions themselves were to take on a few minutes of air time at the most, the host built up the dialogue with much padding and fillers. The mind-numbing result, whereby Michel monotonous speech blended with Georges annoying laughter, was a golden opportunity for the viewers to zap between channels and check out the other simultaneous programs, which were exceptionally rich and diversified that night. Elie Saab new collection blossomed on LBC, while NBN met with Khaled Hdedeh, OTV revealed a new side to Michel Aoun in a special interview, and Ricardo Karam interviewed Said El Khoury on FTVâ€¦

- The presidential elections will be used as a pretext to put The Lebanese Republic itself at risk. The conspiracy plan is still taking form so it is not too late for the Lebanese to overcome it, recommended Michel.

- There won't be a civil war, only smaller clashes or problems.

- The presidential elections will take place despite the latest turmoil.

- The economic and monetary situation in Lebanon will overcome many grand obstacles or crisis with success and Central Bank Governor Riad Salameh will shine further. Hayek sensed a dark atmosphere surrounding Salameh and warned him of possible dangers that might strike his person.

- Real estate boom to be expected. Hold on to your properties people!

- Various Lebanese women (about 4) will receive international honorary titles, including May Chediac, Minister Layla Solh Hmedeh and most probably the wife of a former president .

- Lebanon will not be split into ghettos or confessional cantons.

- Security threats and assassinations will go on, despite a breakthrough in the investigations.

- Skirmishes between Lebanon, Israel and Syria.

- Fireworks will fill the sky of some Lebanese cities celebrating the departure of the head of the Israeli government.

- Shaker El Absi will not remain an obscure matter; He will appear in a new light with a new facet.

- The opposition sitting in Downtown Beirut will be grounds for a scuffle or fight, and some tents or parties will leave the protest.

- Despite Michel Sleiman efforts and achievements, he will be, alongside the Lebanese army, the target of a campaign striving to disfigure his reputation and image.

- A wave of disturbances or turmoil will stir the public opinion, bringing together contradicting parties into one single manifestation or objection.

- Repetitive and different images revolving around the Lebanese armed forces appear to Hayek. New members enrolling and others leaving within its troops, as well as important changes in leaderships and positions. The army will face local forces (trying to rebel), terrorist groups, as well as civil groups resulting constant military presence on all the Lebanese grounds to enforce security and stability.

- Prime Minister Fouad El Sanioura and General Michel Aoun at the mercy of a new conspiracy. Despite the darkness of the picture, Hayek sees a new stand or opinion, a new authority or leadership position, a new equation or equilibrium.

- To disable a conspiracy, the highest authority of Hezbollah will take a decision that will surprise the public.

- Hezbollah will demand clarifications or an investigation regarding an incident which will target one of his leading representatives or political figures.

- A controversial billboard will be problematic in a certain area of Lebanon.

In the end Georges Salibi also got a few personal predictions. An emotional affair or marriage will be the focus of the press. Despite a change of decor, Salibi career will persist at NewTV.

Help us improve this page:   Correct or update the Michel Hayek boycotts LBC & Predicts for the 2008 on NewTV page