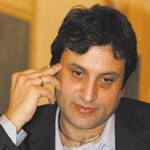 Michel Hayek start talking about the expectations in 2009 with reference to the general atmosphere of this year, he explains as part of the general climate in which there is the summer weather and winter, as is the case of people days which contains beautiful things and bad ones.

Hayek said: "the general climate in Lebanon, my predictions for the year and a half: the available liquidity, encourage investment, which is sold abroad to be sold within Lebanon, the Lebanese pound, will overcome the many shocks, the Bank of Lebanon and the Governor will be a reference to the largest banks and businessmen in the world of good the conduct of fiscal policy and this issue will be the focus of attention of local media and global, and the Bank of Lebanon will survive in the face of crisis, and will receive awards are the focus of pride for all Lebanese, rumors and confusion in the banking community against the owners of the banks and banks to show that after the source of one of Lebanon's enemies, I mean Israel. "

Michel Hayek continued by saying: "We will read the words ( Made in Lebanon ) on many products for local consumption and export. We will read the names of the largest contracting companies, the largest building and construction companies in Lebanon, a major economic growth in the area of agriculture and the health sector. The Lebanese agricultural engineers would have earned remarkable achievements on the ground of Lebanon, as part of this process we will be able to meet the hard crisis of the Lebanese, accompanied by great challenges and demonstrations. "

Hayek Added: "Beirut port will be the port of ports in the region, will see the movement of commercial and tourist stretch the environment, and launch a campaign for the rehabilitation of tourist beaches in Lebanon, we will also see the beginning of architectural projects with geometric shapes, some with the symbols of the Lebanese and Arab figures.

The promotion of world tourism and commercial aviation: airports, aircraft and pilots and modern buildings, pilot training schools in the region, and the increased number of aircraft with Cedar of Lebanon are striking, and the airlines. The Middle East Airlines MEA will achieve a quantum leap to be among the prominent companies.
Lebanon will host global conferences and award ceremonies and will remain free and sovereign country. Parts of our occupied land will come back to Lebanon and the International Tribunal will be held and will reveal the identity of the killer, which represented the identity of assets and dimensions, we will see in the picture and in sound and important facts about the bombing, and we will be shocked by public confessions of one of the figures involved."

Hayek added: "parliamentary elections will take place, the fall of gambling and a lot of great challenges. A major Event will clould the atmosphere of one of the candidates, former Ministers will be have involvement, the religion will have a say in the electoral process."