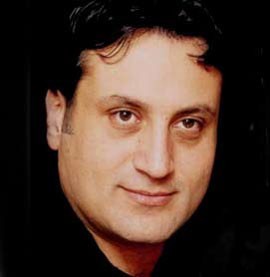 Michel Hayek is a well renowned Lebanese predictor, he tries to predict events in Lebanon, Middle East and the World.

Michel Hayek has been predicting the future as a consultant to firms in the United States, Britain and Australia for nine years.

Michel Hayek tunes in to vibrations, images and signs he gets day and night, even during his sleep.

When Michel feels a hunch or sees an image or a sign, he concentrates intensely so his visions become clearer.
What I do or feel is not exceptional or heroic.

Michel Hayek says that anyone can do his work if they concentrate well.

Michel first major prediction was in the 80s when he predicted the destruction of the U.S. Challenger space shuttle.
Back in the year 1997, Michel Hayek predicted the death of Princess Diana in a car crash.

Among the 2005/2006 year predictions, more than 15 have proved accurate, the most recent was the assassination of Gibran Tueini

Michel Hayek once-a-year appearance on LBC TV, which is broadcast internationally, Hayek said that a big attack in the capital, Beirut, would disrupt life downtown. Six weeks later, a car bomb killed former Prime Minister Rafik Hariri and 21 others, setting off protests in the downtown area that led Syria to end its 29-year military presence in Lebanon.

Tueni was killed Dec. 12, Defense Minister Elias Murr survived a car bombing July 12, and journalist and activist Samir Kassir and politician George Hawi, both anti-Syrian, were killed by car bombs in June. There has been no reported attempt on Lahoud's life, and Hayek freely acknowledges that he makes mistakes.

Michel says that usually predicting that a bomb will occur in Beirut is similar to predicting rain showers in the middle of the winter. Nevertheless, all Lebanese take Hayek predictions very seriously.

The name of Michel Hayek has been invoked in many email hoaxes: such as the email which read "Attention: Michel Hayek reported that a very weird and sudden thing is going to hit Beirut, specifically Downtown, next Saturday so everyone pay attention and pass this message to all your online contacts."

Hayek said that this is nonsense. "Everything like this you read in emails or hear by word of mouth is a rumor," he said. "The only credible sources of my predictions are reliable media sources only."

Help us improve this page:   Correct or update the Michel Hayek page