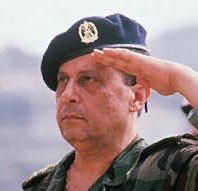 Michel Aoun is a Lebanese military commander and politician. Michel Aoun was born on February 18th 1935 in Haret Hreik, Lebanon.

Michel Aoun served as Prime Minister and acting President of one of two rival governments that contended for power from 22 September 1988 to 13 October 1990.

Michel Aoun was defeated by Syria in the war of liberation and forced into exile. He spent many years in France, were he lived with his family. He returned to Lebanon on the 7th of May 2005, eleven days after the withdrawal of Syrian troops from the Lebanese Land.

In 2006, Michel Aoun (FPM) signed a memorandum of understanding with Hassan Nasrallah (Hezbollah) organizing their relation and discussing the resistance's disarmament based on given conditions. The deal was signed in Mar Mikhayel Church, Chiyah, as a symbol of Christian-Muslim coexistence.

Michel Aoun is one of the most prominent figures in Lebanese politics today, and constitutes with his party an essential element to the opposition.

Help us improve this page:   Correct or update the Michel Aoun page