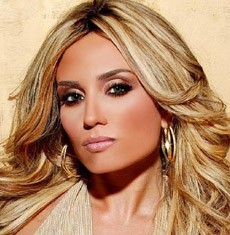 Michaella Stephan is a Lebanese Singer and Television Presenter.

Michaella Stephan, also known as Michaella Timani, was originally a model. She released her debut album 'Law Doumou'i' in 2005.

In 2010, Michaella released a single entitled 'Al li Sou7abou', which was shot as a music video clip.

Help us improve this page:   Correct or update the Michaella Stephan page