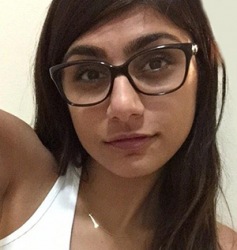 Mia Khalifa (not her real name) is a Lebanese American pornographic actress and model, born on the 10th of February 1993 in Beirut. The birth name of Mia is Sara Joe Chamoun.

In 2003 and at the young age of ten, Mia immigrated with her family to the United States - Montgomery County in Maryland. She later graduated with a B.A. in history from the University of Texas at El Paso, before settling in Miami where she is currently pursuing a career as a professional performer.

Her Arabian looks as well as her "sincere" and authentic performance propelled her to stardom, becoming the most searched name on the leading websites in the industry. A controversy soon arose around her name in the Middle East, starting from the Muslim props (like the hijab) used in some of her scenes, to which she responded through the Washington Post that such scenes are “satirical” and should be taken as such, adding: "There are Hollywood movies that depict Muslims in a much worse manner than any scene [the production company] could produce."

Khalifa's "achievements" also lead to a national debate surrounding feminism back in her country of origin Lebanon , to dispute whether Mia is perpetuating sexism and oppression against Arab women through her acts or on the contrary is helping defy patriarchy in the region. The fact that Mia has tattooed the opening lines of Lebanon’s national anthem across her left triceps ( كلنـا للوطـن للعـلى للعـلم : All of us! For our Country, for our Flag and Glory!) also offended those with a heightened sense of patriotism criticizing her for shaming the country . Via Newsweek, she replied: “They’re embarrassed I’m ‘claiming’ them—as if I had a choice. I was born there.” To note that Mia also has a tattoo of the Lebanese Forces Cross (Lebanese conservative Christian political party symbol) on her right wrist, which she got in 2012, after the October Beirut bombing, in support of her father, “to show him, 'I’m on your side.'"

Mia is very active on Facebook and twitter, on the 3rd of January 2015 she responded with irony to the above:
"Doesn't the Middle East have more important things to worry about besides me? How about finding a president? Or containing ISIS?" referring to the political deadlock in Lebanon that has failed to elect its president ever since former president Michel Suleiman’s term ended on 25 May 2014 .

Khalifa's parents have denounced her to the Lebanese media. She says. “No one in my family is speaking to me”. She describes her parents as “extremely strict, overbearing, and very conservative.”Khalifa says she feels guilty that her family has been caught up in the controversy. “I’ve dragged their name through the mud,” she says. "I feel guilty for dragging them into this and having all their friends know now that it’s on Lebanese media. But that was never my intention.”


To show support to Mia, Timeflies band released a song entitled "Mia Khalifa" on the 6th of January 2015.

In the month of February 2011, at the age of eighteen, Mia Khalifa married an American man.

Help us improve this page:   Correct or update the Mia Khalifa page