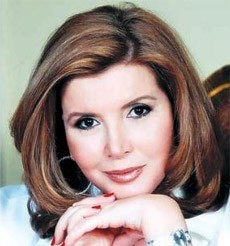 Mirvat Amin also known as Mervat Ameen is a famous Egyptian actress who was born on the 24th of November in 1946 in Al Menia city.

An artist and an actress who became one of the most beautiful actresses in the minds of all arab youth.

Mirvat graduated from the faculty of Arts of Ain shams University; with a B.A degree from the department of English.
She began to act at the University theatre, as she joined the acting group of the University.

She was discovered and presented by the great actor Ahmed Mazhar through the film of “Hob el Morahekat”or “The love of the teenagers”.

Amin took role in the play of ya tala`a el shagara which was written by Tawfik El Hakeem, after her graduation;she managed to become a professional actress as she performed a role on the theatre in the play of “matar el hob”or “The airport of love” joining artist Abd Al Mena`m Madboli.

She played a leading role with magnificent artist Abd Al Halim Hafiz in the film of “Abi Fawqa El Shagara” or “My Father is Over the Treehill” in the year 1969,she also presented the film of “tharthara fawq al Niel”or “gossips over the Nile” in the year 1971,directed by Hussein Kamal. Mervat confined herself to the roles of the romantic dreaming girl as this was clearly shown in her two movies; “el hafeed”or “The Grandchild” by the director Atif Salim in the year 1974 and “Hot Tears” directed by Yehia Al Alami in the year 1975.

At the early 80`s there was a new chapter in Mervat Ameen`s career by all means ; as she was presented to the audience as a new butterfly that came out of its cocoon.She began to work with director Ali abd Al Khaliq through the film of “al hob wahdo la yakfi”or “Only love is not Enough” in the year 1981, Mervat Ameen continued to move on in progress ; as in the year 1983 she participated in the marvelous film of the late director Atif Al Tieb “The Bus Driver” which gained a lot of attention and awards at that time, though the atmosphere of the cinema was controlled by the business cinema.
After that she performed another role in the film of “al bondera” or “The fare meter”with actor Ezzat Al Alaily and director Omar abd Al Aziz,but the real interest of the critics about Mervat Ameen`s career at that time was focused on her role in the film “A Wife of an Important Man” in the year 1988 joined by late Ahmed Zaki ,that same role gave her a lot of credit ; as critics lauded her performance at that film.

Once again she surprises every body by her role in the film of “The Puppet” in the year 1989 with actor Omar Al Shreef and director Hani Lasheen.By the end of the 80`s her roles decreased,her most recognized roles were of movies like "The Sweet Killing” and “Little Dreams”.

In 2001, she made an outstanding appearance to assure her capability to move on in success through her role as the first lady in the film of “Ayam Al Sadat” or “Days of Sadat” joining actor Ahmed Zaki , afterwards she stayed away from the cinema , until she was moved by her passion for cinema as she lately joined super star Adel Emam in the movie of “Morgan Ahmed Morgan”.

Help us improve this page:   Correct or update the Mervat Amin page