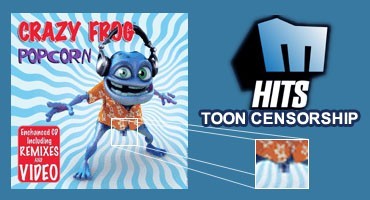 MelodyHits gives in to Censorship

When melody hits was first launched, it had the ambition of becoming the Arab's version of Mtv the most watched music channel in the world.

It sometimes played edgy provocative videos, which upset quite a few in the Middle Eastern regions.

Yet lately, we have noticed a growing phenomenon taking over, foreign to their original corporate culture: CENSORSHIP!

Actually till now, it has only affected cartoon videos, mainly Crazy Frog, in addition to Eminem & Nate Dogs latest Shake That video. But who knows what next.

It is good that Haifa is no cartoon or they would have pixeled her whole
body like they did the poor frog's tiny genitalia. Either show the whole thing or don't, but make a choice right? This is so disrespectful to the artist's work.

And what about Crazy frog's innocent member? It is very sweet and not the least bit sexual!

Honestly do you find his tiny member offensive?

Abu al Abed was once asked
How do you beat Arabs at war?
His answer was Just send your soldiers butt naked to the battle!


Help us improve this page:   Correct or update the MelodyHits gives in to Censorship page