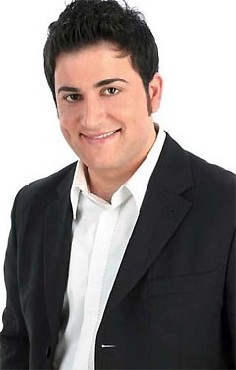 Melhem Zein full name is Melhem Hussein Zein. Melhem was born in the Bekaa, Lebanon on the 21st of October 1982.

Melhim Zein spent most of his life until now in Bekaa. He was raised in a family consisting of two great parents, and 8 children including him.

When Melhem was still a kid he sang a Lissa Faker, a famous song for for Um Koulthoum, in a big ceremony.

At the age of eleven, he participated in the Song Festival that was held for all Lebanese schools, and was the first place winner on the level of Bekaa Province, and the fourth place winner nationwide.

Melhem Zein hobbies include Swimming and playing football. His Favorite color is Black.

Since he was a teenager, Melhem became inspired by the Musician Mohammad Abdul Wahab and Nazem Ghazali.

Melhem studied oriental singing, principles of the music scale at the St. Couer University in Kaslik and at the Oriental College. He also participated in a talent show and won the Prize of Mohammad Abdul Wahab when he sang “Ya Jaratal Wadi”.
Melhem was raised to appreciate classical Arabic music.

Melhem Zein studied law for one year and had to stop in order to join army, which is a compulsory military mission in Lebanon.

Melhem joined the superstar program which was considered his first step to be the arab world new superstar.

Melhem Zein is a nice and promising voice from Lebanon. His voice reminds us of Stars such as: Mohammed Abdulwahab and Wadih El Safi.

Help us improve this page:   Correct or update the Melhem Zein page