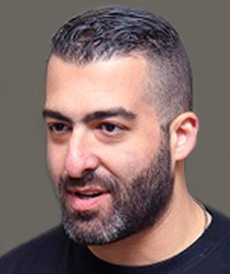 Diab graduated from Studio El Fan in 2002 when he applied to become an anchor. He holds a degree from law school at Beirut Arab University. Before moving to Jordan work in Sawt El Ghad, he worked for several stations and magazines in Beirut. He also hosted few events in Dubai.

In 2012, Mazen Diab started presenting a TV show called "Maa Mazen" on A1 jordan TV channel. In his show he interviewed artists from the Arab world such as: Mohamad Majdoub, Housien El Salman, Dominique Hourani, Anas Al Shariff, Mosab Al Khateeb and many others.

For almost six years Mazen Diab was mostly known as the presenter of the radio show " "Wenta Mrawah" (On your way) on Sawt El Ghad Jordan. He interviewed great artists such as Aline Lahoud and many others.

In 2013, Mazen Diab was diagnosed with lung cancer and few months after he became a survivor. He appeared in a movie dubbed "Eja Dawri" (It's my turn now) a short movie to raise cancer awareness.

Jordanian authorities said Saturday that they had arrested four people who confessed to beating and killing Lebanese media personality Mazen Diab in his Amman home over personal issues.

In the mid of August 2014, Diab became out of reach for two days and when a friend tried to reach him. He was found in his apartment on Friday 15th August 2014. His hands tied with his cellphone charger and his feet with his shoe lace, with marks around his neck.

The Jordan's General Security said the coronary’s report indicated that the cause of Diab’s death was an internal bleeding after the victim was hit with a sharp object.

Within 24 hours, four people confessed to carrying out the crime for personal reasons. One of the four suspects had met Diab during an episode of his show but the relationship was marked with problems. As a result, he asked three of his friends to help him kill Diab.

The statement said the four went to Diab's house, tied him, deleted information, hid the evidence and killed him.

Mazen Diab created his official twitter account "@mazendiab83" in February 2012. His last tweet was "Hello ;)" tweeted on 12th Aug 2014, three days before he was killed. He also changed his profile photo on Google Plus on the 13th of August 2014.

Help us improve this page:   Correct or update the Mazen Diab page