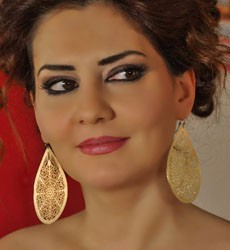 May Sahab is a Lebanese actress and television host.

May Sahab, also written Mey Sahhab, is a TV presenter on the morning show Yawm Jdid on OTV.

As an actress, Sahhab first appeared in the 2006 Television movie 'Le Dernier Homme'. It was directed by Ghassan Salhab and starred many other Lebanese actors including Carlos Chahine, Raia Haidar, Fayeh Hmaisse, Raymond Hosni, and Aouni Kawas.

In the year 2008, May Sahab played the role of Alia in the Lebanese short movie Bukra sette w'nos.

Mey Sahhab is the sister of Ziad Sahab.

Help us improve this page:   Correct or update the May Sahab page