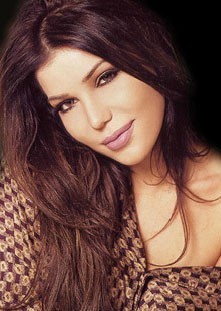 May Hariri is a Lebanese Arabic pop singer.

May Hariri is thought to be one of the most beautiful women in Lebanon and came 12th on the list of Sexiest and Most Desirable Arab Women for 2009 . She dropped a few ranks the following year in Top 100 Sexiest Arab Women 2010.

Equipped with her natural charm and witty spirit, May Hariri was infected by what is now referred to as the Haifa Wehbe virus of models turning into singers; She launched her career as a Pop Artist soon after.
May Hariri however had the support of two major players in the Industry, the director Simon Asmar and her ex husband the composer and singer Melhem Barakat. The latter even added his own vocal effects to one of the tracks (Amma Alek Kalam) on her first album.

May's sexy image was fully exploited early on. In her first video for (Ha Sahhar Ouyounou), a feline, untamed and sexy May shares the set with a real wild leopard! May has a remarkable sensuality to her, with a certain Latin pep and deliberately shows it off whenever possible.
The stardom May achieved in an unprecedented short period of time, was reflected through the vast number of festivals and tours she performed in her first year. To honor the memory of PM. Rafik Hariri, May also crowned the end of her first year as a singer, with the special song“La Ma Koulset Lehkayeh”.


May's style in music is quite varied with different moods, but is generally focused on dance tunes with strong beats pumping over Arabic and Oriental melodies with a Latin touch.


In 2010, May released Tani Hayat a cool dance hit single along with a video. The amusing clip à la Indiana Jones features a Lara croft version of May Hariri.

Help us improve this page:   Correct or update the May Hariri page