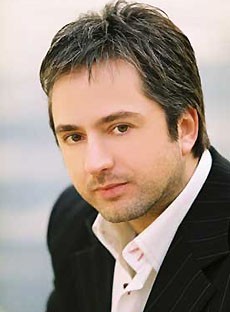 Marwan Khoury dreams are written in musical melodies and lyrics. He never separates between lyrics, rhythm, sound and melody; but marries them together to create what has now become Marwan's unique identity in music.

Marwan studies in music have taken him on an exotic Journey where he earned a degree in Musicology at USEK, during which time he mastered the keys of his Piano; then into the real world where he played along side Rafik Hobeika Band and other Lebanese bands including that of the renowned Sabah, and the young Lebanese singer Wael Kfoury, as he sealed his experience as Wael Band Leader.

From an early age, Marwan started writing and composing his own music, where his first song, Kasak Habibi, was a turning point in his life. Its success expanded his horizons and embarked him on a new journey that so far bears fruit to two outstanding albums.

His first album entitled Khayal El Omr (Time Rider) consisted of 7 tracks and was released in 2003.

His second album entitled Koul El Kasaied (All the Poems), and produced by Rotana, was released in May 2004, and is currently winning honorable battles in the hearts of people and registering a historical record on the charts of romantic songs. The album is mostly famous for the 3 songs that were shot with director Claude khoury, namely, Koul El Kasaied, Khidni Maak and Koul Saa.

Throughout his music career, Marwan Khoury was rewarded on two occasions:
- In 1987, he won first prize for his compositions which was handed to him by the President of the Lebanese Republic.
- In 2003, he was awarded the much coveted Murex D'Or for Best Composer.
- In 2004, he was awarded another Murex D'Or for Best Complete Artist (singer, composer, music video, song and album).

Marwan is also the composer and lyricist of the most appreciated and loved songs in the Arab world, performed by some of the most renowned artists such as Fadel Shaker, Shireen, Saber El Roubai, Carole Samaha, Melhem Zein, Najwa Karam, Madeleine Matar, Majida El Roumi, Cheb mami, Talal Salameh and Abed Al Majeed Abdallah.

Marwan Khoury's name has been scripted in the books of musical history and on the albums of Arab stars all over the Middle East.

Help us improve this page:   Correct or update the Marwan Khoury page