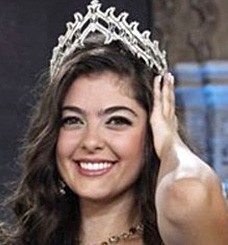 Martine Andraos also known as Martine Andrawos was crowned as Miss Lebanon on Friday June 26, 2009 in Adma, north of Beirut.

Martine received more than $500,000 in prizes, and she will take part in both Miss Universe pageant and Miss World pageant, next to Miss USA Rima Fakih.

Martine Andraos is thought to be the most natural Miss Lebanon to date; so much so that she is teased for her eyebrows. Martine is also enlisted in Top 100 Sexiest Arab Women 2010.