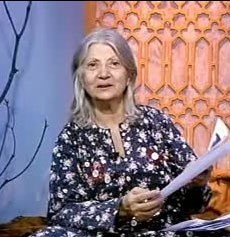 Mariam Nour is a Lebanese Macrobiotic expert and a New-Age guru.

Mariam Nour (Mariam Nour) was born in Douma Lebanon as Marie Nakkour, to a Christian Lebanese father and Armenian mother. She later adopted her new chosen name because it sounded more esoteric and more appealing to her target audience:Arabs and Muslims.


Mariam Nour traveled to the United States where she was given the American passport and was taught by Osho and Michio Kushi. Mariam Nour is said to have suffered from breast cancer in her early thirties, but was supposedly cured by following a macrobiotic diet and using natural treatments. In the late nineties, she went back to Lebanon on a mission by her master to spread New Age and Macrobiotics in the Arab world. After struggling with her earlier patients (some of whom got ill and were taken in emergency to the hospital), Mariam Nour got her breakthrough by appearing on TV. Her first appearances on Al Jazeera TV caught the attention of most viewers, for not only did she present very provocative or radically different concepts, she was also very eloquent. After a few more appearances on Yemen TV, Libya TV and the Egyptian Television, she settled in her new home Al Jadeed TV.

Mariam Noor is unarguably a very controversial personality in the Arab World, and often covers taboo topics like sex and homosexuality or religion and esoteric practices. She addresses the public using what she calls the Shocking System Principle, destabilizing the listeners in order to make them question their given beliefs. Her first TV programs were focused on macrobiotic cooking, but later on were more focused on spiritual and philosophical matters. She often claims to have experienced some of the most bizarre experiences, such as contacting esoteric entities, to extra-terrestrial beings, or even suggests she has traveled to other planets and galaxies.

It is unconfirmed, but Mariam Noor has assisted or cooked for some of the most famous personalities and kings in the Arab World, including Rafic Hariri and Muammar Al Gaddafi. Actually rumors of an alleged intimate relationship between Mariam Nour and Gaddafi resurfaced because of the unrest in Libya (See Libya Protests). A video on Youtube showed the two in a private session held in the middle of the desert. Some assessed the tape as fake, despite Mariam's confirmation regarding its authenticity. The face of Gaddafi was never really shown clearly, and it could very well have been a Gaddafi look-alike. Many similar leaders such as Saddam Hussein are known to have official doubles, not to mention regular Impersonators that could have also assisted int he creation of the infamous video.


Mariam Nour also pretends to personally know American presidents George W. Bush and Barack Obama. Mariam ran a local radio show in the US, and Bush supposedly helped her pick a name for it 'Me-Wee'. People do not always take her seriously, and often question the authenticity of her stories and anecdotes. She sometimes even prints out recycled emails with photos that net users are already familiar with, and shows them on her program along a totally made up story that contradicts with the real one, sometimes even involving herself in it. Some photos, widely recognized as photo-shopped pics on the net sometimes even by their creator, are also displayed on her show as real. All this makes her other more intense and philosophical views less significant, despite their strong appeal and ingenuity.

Mariam Noor has a clear objection to orthodox or institutionalized religions and is often caught up in arguments with men of cloth. She however cannot resist referring or adopting their stories in her speech, creating a contradiction. Perhaps this strategy is necessary, for the Muslim World might not be ready yet for a complete denial of its religion. She was accused by many of hijacking Islam and Christianity, see Father Georges wages war on Mariam.

Given her eccentric personality, Mariam Nour is often an inspiration for drag shows, including for female impersonator Bassem Feghali. She also constitutes good tabloid material, and her stories or views are also frequently discussed in Arabic People's media. What she is especially famous for, is her condescending manners, and her undiplomatic & rude personality. As a TV guest, she often insults her hosts or storms out off the set in the middle of the shooting, like what happened in Kalem Honik Nes.


Mariam Nour has also faced problems with Medical institutions, organizations and Hospitals, and often denounces them on her TV shows. She is accused by the scientific community of luring viewers into believing that they are being given natural products that would heal them, when she is in fact poisoning them or putting their health at risk with untested products. In 2011, she appeared on a TV show with Tony Khalifeh, bringing with her a product that cures cancer. After the product was checked by experts, it turned out to be a toxic chemical banned in the West.

Mariam Nour was for a while a very influential woman and ranked 6th in Most Powerful Lebanese Woman 2006. She gradually became repetitive on her show and lost her initial appeal. She used to co-run an alternative shop called Salam Center in Beirut, where she sold Macrobiotic products and gave yoga lessons and meditation. After a dispute with her partner, which is thought to be money related, she left the center and opened shop solo in her home in Ashrafiyeh.

See also How to become a Yogi Mystic Guru.


Help us improve this page:   Correct or update the Mariam Nour page