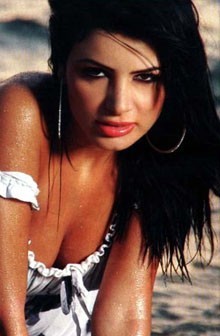 
Maria Nalbandian was born on the first of August 1983,to a Lebanese father and an Armenian mother. She has one younger brother (that plays the guitar). Her mother is a poet and her father is a singer. Maria studied business marketing, and speaks three languages: Arabic, Armenian and English.

Maria Nalbandian began her career as a model when she was only 13 years old. She worked as a Freelancer with many modeling agencies, and did many advertisements which were all a success.

Maria then went on to represent Lebanon in the Miss Asia Bikini beauty pageant held at Malta, where she was elected as Miss Bikini Asia for 2002 at the age of 17.

Maria Nalbandian took two years to complete her debut music album Elaab, which was produced by Melody hits in 2005.

The album was a big success due to her first video clip directed by Jad Choueiri, which tagged Maria as a sexy woman with a Lolita behavior. The Album was a production of Melody Music and Management by Aya Production. Most of her consecutive clips with Jad also reiterated that same image. Despite her average vocal performance, all of Maria's catchy tunes made it to the top 10 Arabic charts with ease. The song Elaab became synonymous to Maria, thus her nickname Maria Elaab.

Maria appeared on stage for the first time during the Miss Summer 2003 with Melody TV.

In 2007, she released her other album Werge3t Tani, with solid hits like Stop-Ta3ala Bas.

Since the end of her strong collaboration with Jad Choueiri, Maria seems to have declined in popularity. In 2008, she starred in the movie Bidoun Rakaba next to Ahmed Fahmy. The movie received bad reviews, partly because the duo lacked chemistry on camera. The other reasons being the week scenario and bad directing by Hany Gerges Fawzi .

Maria Nalbandian received much criticism because of her naughty and playful videos, especially her suggestive ways whit Candy. For a short while, a new lollipop brand under her name was actually released in the Arabic markets! What was once considered a vulgarity however has become today a natural occurrence on the Arab Pop scene. The Egyptian Sandy Singer, for example, shows many similarities with Maria's early beginnings.


Help us improve this page:   Correct or update the Maria Elaab page