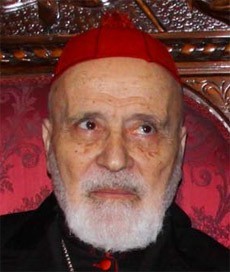 Mar Nasrallah Boutros Sfeir was the patriarch emeritus of the country of Lebanon, the Maronite Church, an Eastern Catholic Church.

Nasrallah Boutros Sfeir was born on the 15th of May 1920.

On the 27th of April 1986 Nasrallah Boutros Sfeir was elected as the Patriarch of Antioch for the Maronites. He was confirmed by Pope John Paul II on May 7, 1986.

Boutros Sfeir was the third Maronite Cardinal and the 76th Patriarch of the Maronite Church with the official title of "His Beatitude and Eminence the seventy-sixth Patriarch of Antioch and the Whole Levant".

Cardinal Sfeir submitted his resignation to the Congregation for the Oriental Churches in Rome in late 2010, However his resignation was not accepted at first because 6 Maronite bishops have submitted their resignations after reaching the retirement age of 75 in June 2010.

On the 26th of February 2011, his resignation was finally accepted by Pope Benedict XVI .

On the 15th of March 2011, Bishop Bechara El Rahi got elected as the new Patriarch for Antioch following the resignation of Sfeir.