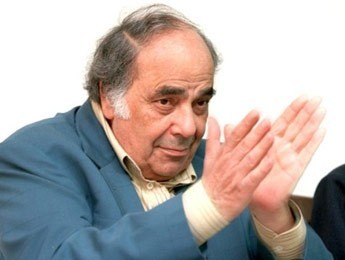 Mansour Rahbani was born in the year 1925 and died on Tuesday the 13th of Januray 2009 from pneumonia. Mansour joined his brother Assi El Rahbani to write and compose songs and poems for Assi's wife, the arab diva Fairouz.

The two Rahbani brothers formed with Fayrouz the new Rahbani trio. The brothers have inspired their music from the Arabic, Maronite and Islamic Culture, They studied the western classical music and combined it with the Lebanese folklore.

The Rahbani Brothers focused their theater on village life, and the love of one to his country.

Mansour first work was in the year 1957 in a theater named - The harvest time - which took place in Baalbeck.

Following the death of his brother in 1986, Mansour composed several plays on his own, including the Gibran and the Prophet Theater in 2005 and then The Return of the Phoenix.

Help us improve this page:   Correct or update the Mansour Rahbani page