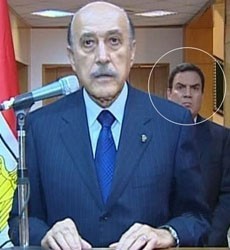 The Man Behind Omar Soliman

Who was that mystery man behind Omar Suleiman?

The Guy Behind Omar Soliman is a virtual celebrity that emerged right out of the 2011 Egypt Protests. The mystery man became the subject of humor and jokes in Egypt and later on the rest of the world, after appearing in the historic televised speeches issued by then Vice President Omar Suleiman, especially the one in which he announced the resignation of former President Hosni Mubarak.

Despite the gravity of the situation, the Egyptians, known for their sense of humor, could not help but focus on this mysterious figure standing behind Omar, equipped with a grave and serious expression, and that was continuously shifting his eyes from side-to-side.

The man behind Omar Soliman was later identified as Major Sherif Hussein of the Egyptian special forces’ Unit 64.

But before that, a number of Facebook and Twitter pages were created for 'The Guy Behind Omar Soliman', with fans speculating on his identity.

Eventually a new photoshop trend exploded on the internet dubbed the MBOS with edited pictures of this man featuring him in the most bizare of situations and contexts. He was depicted as a career-ending angel of death, and was made to stand behind other figures such as deposed Tunisian president Zine El Abidine Ben Ali, deposed Egyptian monarch King Farouk, and former Iraqi president Saddam Hussein, or even behind Hitler.

Most of these groups were later deleted or renamed Apologies To The Man Behind Omar Soliman etc...

Many popular jokes were also based on him. Some of the most famous jokes about 'The Man Behind Omar Soliman' also made fun of the biased official Egyptian state television, famous among Egyptians for its blunt lies. It had continuously undermined the rebellion by showing wrong information and this is why most Egyptians tuned in to Al Jazeera TV. One of the jokes went on "Egyptian State TV: There was no guy behind Omar Suleiman."

Help us improve this page:   Correct or update the The Man Behind Omar Soliman page