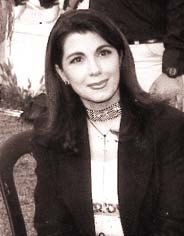 Contrary to what have been said, and although she is proud that she belongs to the Arab world, Majida is Lebanese. She was born in Tyr, a city in South Lebanon which historically was the ancestor of the city of Carthage in Tunisia. Her grandfather had some business in Palestine and built strong relations and friendships with the people over there.

When Majida was around six, the family moved to Kfarshima, a small town to the south east of Beirut. The town has a quiet nature and a lovely atmosphere, probably two things that show in Majida's personality. When you talk to Majida, you will be surprised with the difference between her on-stage and her real personality. She is so strong, powerful and 'loud' when singing; so quiet, shy and calm when she talks to you.

Kfarshima is also known for its non-fundamentalist, but still religious environment; Majida was raised on such principles as to love, care and respect everyone, believe and trust God and rely on him for His blessings and support. Majida is well known to be a devoted believer; she reads the holy books and prays every single day, but most important is that she acts upon her beliefs, and probably that is why she is optimistic and always looking forward to a better future.

Many people have come to identify Majida with 'Sufis'. Majida enjoys reading, and besides the Arabic poetry, she reads a lot of philosophy; that is clearly reflected in the way she comprehends things, deals with others and manages her life. When you sit and talk with her, you will think that you are in the presence of a lecturer or a philosopher, and in any case, u will end up feeling comfortable with yourself, and most important, being more attached to that unique personality of hers.

Although being a devoted believer, Majida isnt a religious fanatic; she admires all religions and their principles, but most important, she respects the human as an entity of its own and admires freedom regardless of one's own nationality, gender, age or race.

Kfarshima presented many singers, musicians, poets and writers, like the late Filimon Wehbi. Growing up in such an artistic environment and living in the same house with Halim El Roumi (the very same person who discovered Fairouz), Majida's interest in music started to show at an early age when she used to listen to the works of the prominent figures at that time (Umm Kulthoum, Abd El Wahab, Asmahan….). She attracted the attention of her family and neighbors and began to sing as a hobby in front of them. One of her early songs was a religious song called 'Your Birth' (Miladak).

A cousin of hers was fascinated with her voice and thought that she could hit high if she pursued singing as a profession. However, the big obstacle was Halim El Roumi himself; perhaps the man knew more than anyone else did how difficult it was to become and stay a good artist and still live a decent life. He refused Majida's participation in a TV program for amateurs, 'Studio of Art' (Studio El Fan). Nonetheless, Majida appeared on TV to sing songs for Asmahan and Leila Mourad, like "O'Birds" (Ya Toyour), "My Heart is My Guide" (Ana Albi Dalili), "The Joyful Nights in Vienna" (Layali El Ouns Fi Vienna)… The jury was surprised with her performance and awarded her with the first prize with excellence. The viewers were stunned by her strong crystal voice and unique self-trust; "from her first appearance, we fell in love with the tanned baby face and the long black hair" says one, while another comments "as soon as I heard her voice, I was drawn to sit in front of the screen and listen to her chant with admiration".

A star was born…

Halim El Roumi couldn't refuse anymore and Majida got his blessings and advice: to perceive singing as a mission, how to respect and be respected and how important an education is, especially for an artist.

But the civil war broke out in Lebanon in 1975, only a year before Majida could obtain her BA in Arabic Literature from the Lebanese University. Majida expresses her eagerness to go back to the university and finish her studies, even at this age, after this fame.

In 1977, Majida got engaged to a businessman from Byblos (Jbeil). Since then, Antoine has become the manager of Majida's work and her life-time partner. They were blessed with two daughters: Hala who is majoring in Interior Design at a university in Beirut and Nour who is still at school.

Since the very first beginning, Majida has drawn a clear-cut line between her work and her private life. Although she is very picky in her songs and very demanding in her work (both which require much time and attention), Majida gives priority to her family; the family is the center of her life and singing is something she likes to do. Probably that is one of the main reasons why the general public has heard little if not nothing about her; she tends to avoid the media and to reduce her public appearances in social and artistic gatherings, to an extent that some believe that Majida dislikes the media and lacks friendships among other singers. As a matter of fact, Majida believes that when she has something new to say, she can come forward and say it through the media, but she does not like to repeat herself over and over again, as not to bore the public; for that, she is respected, and at the same time, sought among the media people. ('Alwan' has been the main Lebanese magazine covering and following Majida's news and acomplishments).

Majida didn't flee during the hardest years of the war in Lebanon; like the other millions, she endured the horrible incidents and events that occurred and survived. She loves her country and devoted many songs to it, singing for rebirth, sovereignty, independence, peace and hope, ideals she strongly believes in, highly treasured and painfully paid for. Wherever she goes, she carries Lebanon in her voice, not a part of it, not a group, not a fraction… a nation she dreams of and lusts after: "if its not real during our days, then let us help make it real for our children" (1994).

In her first song "I Dream of You, O'Lebanon"- 3am I7lamak Ya 7ilm Ya Libnan, Majida was addressing a country which was under fire and destruction; she held her faith and love strong enough to dream of a Lebanon, the Phoenician bird which would be reborn.

Through "Qana" (released in 1996 as a response on the Israeli massacre in South Lebanon), Majida presented a clear Lebanese message to the whole world, a message that was stronger than any other political or diplomatic letter. Majida affirmed that Lebanon would always be ready to fight for its rights and lands and would never give in and accept any kind of humiliation and disregard. The song was powerful with meanings which led the Israeli Embassies in some Arab capitals to protest and requested seizure of broadcasting.

However, her Lebanese identity and her commitment to her country have not blocked out to any degree her love and concern to all other Arab countries. She has a very special place in her heart for Tunisia and Jordan, the two countries that have warmly and touchingly welcomed her, several times, on stage or away, people as well as governments. And despite the unfair rumors of the early 1990s, Egypt has done her more than good especially when Majida was honored with the presence of the President himself if a couple of her concerts, or when the Symphonic Orchestra of Cairo Opera has started to accompany her in many of her concerts.

You never know what is next with Majida El Roumi; she is a burning flame promising of more light. She has big dreams, for her country, her family and herself; but she never dreams of replacing Fairouz. Many people have been trying to ruin Majida's image by accusing her of seeking to take over Fairouz's glory. Majida thinks that Fairouz is not just a singer; 'Fairouz is rather a nation and she can't be replaced or repeated'.

However, one can’t deny that Majida El Roumi has conquered a leading place in the Arabic song. So many, she has become a symbol and idol. Whether she is a diva, or elected as the 'Voice of Love' or 'Singer of the Arab conscience', Majida remains a simple human, a faithful wife, a caring mother and a true friend.

No wonder why she refuses any proposed titles; Majida El Roumi is enough.

Help us improve this page:   Correct or update the Majida El Roumi page