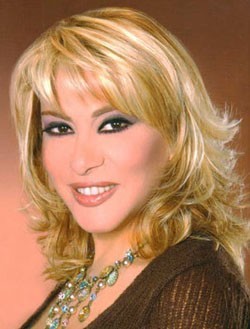 Maguy Farah is a well known Lebanese Personality; She is a television host and a horoscope personality. Maguy was first known as a horoscope presenter at Voice of Lebanon Radio (VDL).

Maguy Farah started working with VDL in the early 1980s along with director Johnny El Saddik. They both worked on her daily horoscope morning show and her talk show El Haki Baynetna and Al Siyasa Fi Oghniya every Saturday.

Maguy Farah was also at the time the director of the News Cast at VDL. Maguy was very famous and everyone loved her and loved her radio shows.

Few years after working at VDL, she published her first horoscope book, which became a best seller and drew readers from all across the Arab countries.

Many people believed in what Maguy told them in her yearly horoscope book; She used the well know astrological measurements to do her predictions and calculations.

Maguy Farah appeared for the first time on Television as a judge in Studio El Fan, a famous program which discovers talents from Lebanon, a program which was hosted on the Lebanese Broadcasting Corporation.

During her work at Studio El Fan, Maguy Farah was always glittering in karisma. Her Karisma and her high education led her to join Murr Television (MTV Lebanon). At MTV Lebanon Maguy had her own television show for the first time. The Show was know as El Haki Baynetna; A Political TalkShow which drew many viewers and hosted leading political figures from Lebanon and the Arab Countries.

A misunderstanding between MTV (Murr Televison) and Maguy over some SMS voting polls run by LibanCall had lead Maguy to leave the Station without giving notice.

Maguy Farah soon filed a law suit against the station; however she lost against MTV slander appeal. In return, Murr Television won a libel and slander lawsuit which the station has filed against Maguy Farah.

The Court of Appeals in Beirut rejected the appeal submitted by Maguy Farah after she lost the case.

The ruling gave Murr Television (MTV Lebanon) and its chairman the right to file a lawsuit against Farah to receive compensation for her sudden parting with the TV station.

In 2000, Maguy Farah, joined Future TV, as a presenter where she had "absolute freedom" in her position. Yet she conceded that the link between Future TV and Mr. Hariri meant she would be unlikely to host Mr. Salim El Hoss in her show.

Few years later, Maguy Farah left Future Television Too. She disappeared from the media scene for some time; then she appeared again as one of teachers at Star Academy Lebanon.

Maguy Farah Horoscope book which was once the only horoscope book in the Arab world, Today her book competes with hundreds of other horoscope books from other known names such as; Samir Tomb, Karmen Shamas, Joumana Kobeissi and many others.

Maguy Farah horoscope book is nevertheless one of the most selling books in the Arab world, It is by far the biggest too, with hundreds of pages and details.


Maguy Farah takes a lot of time preparing for her yearly horoscope book which is a big seller in major Internet Online Stores including eBay.


Make sure to check our Maguy Farah Horoscopes 2011 recap for a quick overview of the year and its zodiac signs.

Help us improve this page:   Correct or update the Maguy Farah page