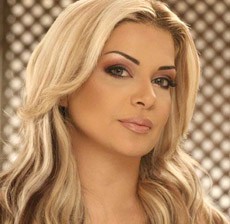 Madeleine Michel Matar was born on the 12th of March 1972. She started her career as a crowd warmer for the highly praised singer Wadih El Safi. The latter presented her to the public while on stage at a concert in London. She then took part in the TV talent show Kaas El Nojoum on LBC, where she was awarded the Kaas El Jomhour (Public Award) in 1998.

For four years, Madeleine Matar studied oriental singing at the music conservatory. After refining her voice and mastering the necessary skills to deliver good interpretations, Madeleine was lucky enough to collaborate with the talented Marwan Khoury, who gave her some of her best hits to date. His songs gave Madeleine a unique flavor that was much needed in the crowded industry.

Pretty soon she was giving concerts all over the globe including Paris, London, Spain, the United Arab Emirates, Bahrain, and of course her native Lebanon.

In the year 2001 Madeleine singed a contract with music giant Rotana, which produced her debut album entitled Raydah (I want him).
Rotana produced for her 3 video clips, La Jamal El Shokr, Aashka ya Lil and Rayadah, all of which were directed by Said El Marouk.

In the year 2003 Madeleine Matar released her second album entitled Ala Bali Hawak. If by any chance her first album didn't make it to a few remote places of the Arab world, no one could longer ignore the presence of Madeleine thanks to the album title song. Ala bali Hawak, a soft electronic ballad, topped all the charts and was run in loop on most ipods. Ala Bali Hawak is to Madeleine what Ayshalak is to Elissa; a fetish song! The video for the song was shot in Marbella Spain, also under the direction of Said El Marouk.

In late 2009, Madeleine released a music video for her new oriental disco house song Amma Agayeb, which was directed by Fady Haddad. The clip was so fresh , sexy and daring, that it almost rivaled with the excellence of the song itself. It also featured Mister Lebanon Abdel Rahman Balaa, who co-starred next to Madeleine. The video was released only a mere few days after he had won the title, which was a weird coincidence. The beauty Pageant was already facing tough criticism for not being professional and corrupting the results, and now this video which was shot shortly before came only to ignite more doubts.

The real controversy surrounding this video, however, came a few weeks later. It was a stunning case of plagiarism, whereby the video was entirely copied from start to finish! It was a perfect reproduction of the video Sohrani Menya (Save Me)by Russian group In-Yan. Their video was directed by the Ukrainian Badoev.

Madeleine and Fady Haddad tried to come up with all sorts of explanations, but none were credible.

They were both nominated for a Banadoura d'Or Award and won in the Ripoff category!

Help us improve this page:   Correct or update the Madeleine Matar page