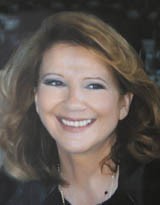 Layla Solh was nominated for the most powerful women award in 2008 and she her name was on the top 3 official winner list.