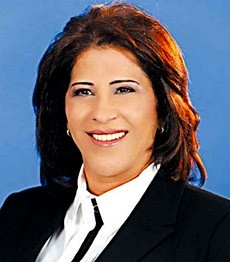 The name Leila Abdel Latif has become very famous in the expectations field; Leila became distinct for her ability to make true psychic predictions, give highly probable expectations, foresee the future, identify names and clarify inspirations... Her father, Sheikh Mohammad, was an Egyptian Mufti in Al-Azhar Mosque. He was also gifted, a pious man enjoying the ability to cure people through the Holy Quran. Her mother is Lebanese.

Leila Abdel Latif stresses that she doesn't foretell the future and that she's not a fortune teller, but rather just possesses a strong inspiration and a 6th sense that is growing with time and materializing into reality 90 to 100% of the time.

Leila doesn't believe in reading the coffee cup or the Tarot cards, nor in horoscopes or hypnosis! Abdel Latif's name gradually became known worldwide, after politicians, economists, and artists from Lebanon, the Gulf and other countries, in addition to international companies started seeking her advice. She has already met 4 Heads of States and 2 Kings!(Probably so many more since we wrote this article)

Leila emphasizes that she is unable to explain her inspiration, and no one else was able to do so for that matter. She masters this talent instinctively and doesn’t seek help from any books or other tools... she just concentrates and then talks about what she feels and senses!

Leila Abdel Latif will soon be interviewed on CNN, read more about this news in Lebanese fortune teller.

We quote Leila Abdel Latif : I'm the eldest girl in my family. My father was Egyptian and he was a Mufti in Al-Azhar Mosque in Egypt. He came in a mission to Lebanon, met my mother and got married. He died at the age of 47 when I was still at the age of 8. I don't remember too many things about him, but I clearly remember that our House in Beirut was full of praying people since my father was praying in the Holy Quran to heal people's illnesses. He used to feel things before they happened, but he never agreed to reveal the secret to anyone nor to foresee the future of anyone. My mom still says that he used to hear the steps of my grandpa (my mother‘s father) before he reaches our home at night, and then he would later arrive (un)expectedly. I believe that miracles are gone with the days of the prophets, but my father had the power of healing people.

Back to me, I started to have these inspirations the time of my father's death, my mother used to ask me about things and I used to nod with my head and she said that what I used to tell her came true. But she refused to take me seriously as she didn’t want me to be arrogant because of my tender age.

My sisters and I were very fond of my grandfather. My First distinct inspiration occurred when I told my mother that our grandfather is not coming back to us. But she assured me that he went to the pilgrim and Will come back, but he died in there!

My ability chocked my mother and aunts.

The next incident occurred when my uncle accompanied us to spend the summer in Mechref area. We were delighted with the house, but my mother was watching me while 1 was contemplating it, and I told her that we're not coming back even though she assured me that it belongs to us.

And we only came back once because my uncle died.

Help us improve this page:   Correct or update the Leila Abdel Latif page

This Article was prepared by Leila.Abdel.Latif
All copyrights are reserved to the Author of the Article