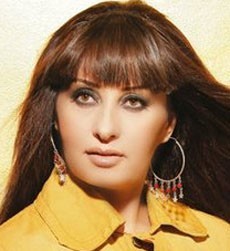 Latifa also known as Lateefa or Latifah is a famous arab tunisian singer.

Her real name is Latifa Bint Alayah Al Arfaoui, Latifa was born on the 14th of February 1961 in Manouba Tunisia.

The word Latifa in the arabic language means Soft or Tender.

Latifa started singing since she was six years old, however it was not until the year 1983 and shortly after her father died that her professional life as a singer started.

Latifa took a trip to Egypt to rest and mourn after her father passed away. at the time, Latifa met composer Baleegh Hamdi, who advised her to move to Egypt for the best of her career.

Latifa released her first album in the year 1985 and it was entitled Andak Shak?

Latifa kept steady in releasing new albums throughout the 80s and 90s, however after her 1999 album Wadeh (Clear) she did go away for almost 4 years.

In the year 2007 she released Maaloumat Akeeda and Fil Kam Yom Illi Fato in 2008.

In December of 2009, She released her album Athada which was a big success.

Help us improve this page:   Correct or update the Latifa page