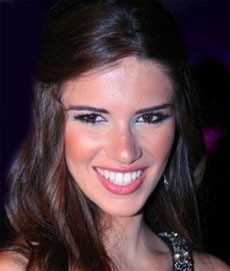 Lara Scandar(or Lara Iskandar), is a pop singer from Egypt.


Lara Scandar was born on the 18th of December 1990 in Santa Monica (California), but raised in Egypt. Her father is half Egyptian and half Italian and her mother is Lebanese.

Lara Scandar joined the TV reality show Star Academy 6 in 2009, where she showcased her talents and received her first great exposure. Although she only made it to the semi finals, Lara managed to assemble a large fan-base. She excelled mostly in foreign songs, rather than Arabic.

It became expected that Lara's first hit single out of the Academy would be in English. She released Mission Is You on the 4th of February 2010. It's an English track, produced by composer Jean Marie Riyashi. The clip for the song was shot in Los Angeles under the direction of director Ray Kay.

Lara Scandar received an encouragement award in MEMA 2009 Egypt. She also ranked second in the Top 100 Sexiest Arab Women 2010, and was awarded the title of Sexiest Arab Starlet 2010.


Lara had studied at Shouyefat School and then continued her higher education at the American University of Cairo AUC.

Lara plays the guitar and the Piano very well, her hobbies include Ballet, Kickboxing and Modeling.


Make sure to check our interview with her under Lara Skandar Mission Is You Interview.


Help us improve this page:   Correct or update the Lara Scandar page