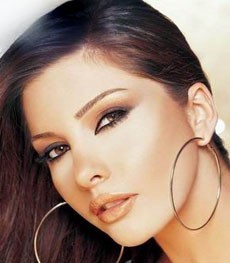 Lamitta Frangieh (or Franjieh) was born in Zgharta,a beautiful city in the North of Lebanon, and raised in Beirut. She is the oldest among her two other brothers Anthony and Boudy. Her father is Hamid Frangieh, and her mother Dadi Frangieh.

Lamitta did not have a normal childhood as her stunning beauty would always attract attention. At 14, she had enough encouragements to take it to the catwalk and become the most talked about model in the industry.

Even though she was still young, Lamitta packed a large portfolio which included numerous photo shoots and commercials. She was also crowned Miss Independence 1995,a small Lebanese beauty pageant for teens.

Lamitta started her modeling career with Nathaly's Agency, then moved to Nidal Bcherrawi Modeling Agency. She quickly became one of Lebanon's most promising beauties.

Her fan-base in the Arab world however, only increased after her participation in the Miss Lebanon 2004 pageant, which was presented as a TV reality show produced by LBC International. Over the span of 6 weeks, the Arabic public discovered what the Lebanese have known for years; an extremely sensual girl with a classy charm. It was weird for the Lebanese public to see such a well established top model enter a reality program intended for amateurs. Whether Lamitta gave more to the show than she gained out of it remains quite a subjective matter. The eager public was disappointed, when Lamitta lost the title; a title that was perhaps too small for her to begin with. On stage, Lamitta was not able to abstain from showing her discontent and stormed off stage(with her sexy flip as always!), which was quite a strong statement! Some believe the crown was promised to her in return for her participation, but last minute networking and connections (common in such pageants) might have yielded it in to the other candidate Nadine Njeim. Miss Photogenic was clearly not enough for Lamitta! She also turned down the first runner up title, in a press conference the following day.

A middle ground seemed to have been reached in 2005, when Lamitta Framgieh finally represented Lebanon at the Miss World Pageant, as an alternative to Miss Universe.

Lamitta has since appeared on dozens of magazine covers, along a huge amount of TV and print commercials

In July 2005, Lamitta modeled for Robert Abi Nader in Paris, to the delight of the french public.

Lamitta has also worked as a editor for fashion and beauty magazines, and has hosted a TV show on LBC that sheds light on touristic Lebanese sites.

CONTROVERSY
In 2007, Lamitta Frangieh’s name was caught up in the Cannes Call girl scandal controversy. Dozens of young women, including former models and beauty contestants, and their wealthy Middle Eastern clients were briefly held after a series of police raids on flats and hotels on the Cannes waterfront. Lamitta Frangieh was one of them, but attests she was there only to take part in the Cannes Film Festival. She rushed back home to Lebanon the next day, to appear on TV and deny all ties with the scandal.READ MORE


PERSONAL AMBITIONS AND INTERESTS
It is Lamitta's ambition to be a successful businesswoman, wife and mother.
Hobbies and interests are: Tennis, skiing, swimming, traveling, and her favorite music is: Pink Floyd, Techno & Jazz. Favorite food: Seafood, Sushi, Italian, and of course Lebanese cuisine. Personal motto is “Reality is a name we give to our disappointments”. The Miss World 2005 Final was held on Saturday, 10th December. Lebanese Model Lamitta Frangieh was the only Arab competing for the title. Miss Egypt 2005, Miriam George, did not compete for the title.

How would you describe yourself in three words?
Ambitious, Calm, Responsible.

Do you have a special or unusual talent? (What is it?)
Writing and Oriental dance.

Where would you most like to visit in the world and why?
Each country has its distinguished nature and culture. I find it hard to choose a favourite destination since each destination is special in its own way.

What is the best thing about your country?
Lebanon has been and still is the meeting of great civilizations and cultures. This marvellous land, rich in its cultural heritage and beautiful landscapes, archaeological treasures and varied cuisine, the warmth and hospitality of its people, is a country that has long been destined for tourism.

If you were granted one wish, what would it be?
I wish for a long healthy time together with my family.

If you were stuck on a Desert Island with one other person (famous or not whom would you choose?
I would choose My Mother.

What is your message to all the other Miss World contestants?
My message to them is to work hard to bring out the best in themselves and have faith in God and confidence in their abilities.

Help us improve this page:   Correct or update the Lamitta Franjieh page