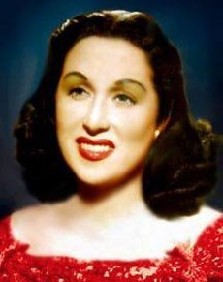 Laila Mourad also known as Leila Morad or Layla Murad is a classical Egyptian female singer who was born on the 17th of February 1918, She died on the 21st of November 1995.

Laila Mourad was born in the area of Al-Daher in Cairo, Egypt. Her father was Ibraheem Zaki Mourdashi, an Jewish-Egyptian religious cantor, musician and singer who was mostly famous in the 20s. Laila Mourad mother was a Jewish-Polish origin.

Layla had three brother Ibrahim, Malak and Mounir who was an Egyptian actor and composer, and one sister named Samihah Mourad.

Her last movie was in the year 1953 entitled Sayidat Al Kitar - The Lady of the Train.

Help us improve this page:   Correct or update the Laila Mourad page