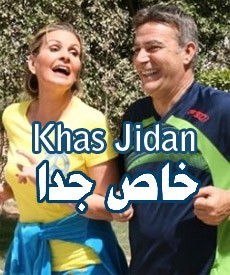 Khas Jidan revolves around the story of a famous psychiatrist, Doctor Sherifa, played by Yousra.

Doctor Sherifa works in two mental hospitals localed in both Egypt and Dubai.

During her daily job Yosra meets different types of people and tries to solve their problems.

The story is written by Tamer Habib and directed by Ghada Salim.

Help us improve this page:   Correct or update the Khas Jidan page