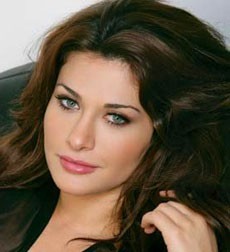 Karina Eid was born in Dakar, Senegal, West Africa, and raised between Gambia, and Beirut.

Between the years 1990 and 1997, Karina studied classical piano. She also studied opera at the Lebanese Music Academy,and vocal techniques with Soprano Professor Mr.Edgard Aoun. She was also trained in Hollywood with Mr.Budy Mix who has been known to coach stars like Mariah Carey!
Karina won many awards including Gold Cup Winner in 1994 of the Fidof International Competition for Singing “ I will always Love you”, and “ I have Nothing” by Whitney Houston. The event, which aired on LBCI, was under the Supervision of Mr.Sami Clark, and Lebanese Minister Mr.Michel Daher.

Her debut album 3ALATOUL was released in 2004, and included the hit single Alatoul.

In the year 2006, she released a successful single entitled YA REYT BCHOUFAK, a great song which was written and composed by Karina herself and arranged by Michel Fadel.

In the year 2008, Karine released another hit single called MA BTICHBAH HADA, the song was written by Nabil Abou Abdou, composed and arranged by Michel as well.

During the month of June 2009, Karina started her own Recording studio in Beirut, with a company called MUSIC FACTORY for different kinds of audio recordings.

Help us improve this page:   Correct or update the Karina Eid page