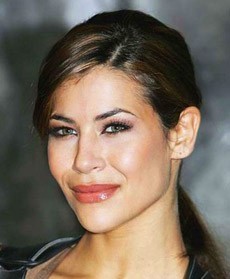 Karima Adebibe is a famous Moroccan Irish Actress and Model.

Karima Adebibe was born on the 14th of February 1985 in London, England. She also has roots from Greece. She grew up in Morocco, and moved back to England at age 7.

She started promoting the game on TV and radio, after going through intensive training to acquire Lara Croft's martial arts techniques and skills.

In March 2006, She got listed among other sexy females in the The HOT List issue of Zoo.

In 2004, Karima Adebibe played a small role in the horror movie Alien vs Predator.

In 2008, Karima Adebibe retired from her role as Lara Croft and decided to continue her career in both acting and modeling.

Help us improve this page:   Correct or update the Karima Adebibe page