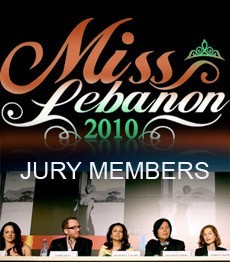 Laura Lahoud member in the committee of Al Boustan Festival

Malik Mrouweh Media personality and a member of the Syndicate of Media in Lebanon.

Noula Fares from the Ministry of Tourism in Lebanon.


Refer to Rahaf Abdallah for a full review of the Miss Lebanon 2011-2010 Pageant.

Help us improve this page:   Correct or update the Jury Members of Miss Lebanon page