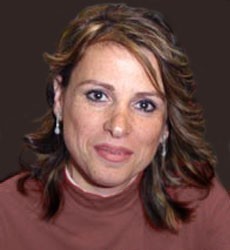 Joumana Koubaissi is a Lebanese astrologer, numerologist and psychic healer.

Joumana Koubaissi (aka Joumana Kobeissi, Jumana Qubaisi or Joumana Oubaysi) became famous after doing a TV show on nbn, in which she would give live readings and predictions to callers from around the Arab World.

Joumana Koubaissi comes from a family of mediums and psychics. Her father and grandfather both worked in this field.

Apart from horoscopes, she can also predict one's future based on one's name. Because she so often asks her callers to change their names suggesting better ones for them, she is often referred to in popular jokes.

Joumana Koubaissi was the first to predict the downfall of the US economy, and she had also warned of a possible attack most probably the assassination of Barack Obama, long before anyone else. She also warned of a civil war and the dissolution of the USA into separate independent states. She also advised people not to use the American currency.

Joumana uses spells and prayers inspired from the Koran to cure the ails of her clients. She believes in spirits, daemons, angels and the existence of a parallel astral world. She says long ago both humans and astral beings lived together on the same plane, before they were separated. She also says one day they will reunite again. She believes Gnomes walk sometimes among us but can be unmasked by their large feet. She adds, they are known to be jealous of human's beauty. They can also attach themselves to people (to becoem what is known as 'Qarineh') and bring them misfortune or prevent them from getting married or having a regular life...

Help us improve this page:   Correct or update the Joumana Koubaissi page