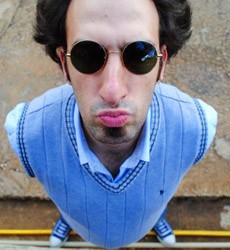 Joseph Azoury is a Lebanese actor and a hilarious slapstick comedian.

Although the name Joseph Azoury might not ring a bell right away to the majority of the Arab public, Joseph still has got one of the most recognizable faces for he has starred in many funny TV commercials tailored for the Middle Eastern markets. Some of the wacky ads he was featured in even won awards! He has also taken part in a few TV series, as well as many kids shows and theater plays...

For Joseph Azoury’s complete biography, please check further below. But first we would like to share with you a short interview we had with him.

Joseph Azoury is one cool, easy-going and frank chap. His laid back personality encouraged us to ask him questions other artists could have considered offensive, but not Joseph. As you will soon notice, his sweet and generous nature is evident in the following interview. Enjoy.

Hello Joseph, and thank you for this interview.

Welcome, anytime. It's a great pleasure. Thank you Fanoos magazine for seeking Lebanese talents in the Lebanon and the whole world.

You have this written on your facebook profile: All I need to make a comedy is a room, a Lebanese policeman and any pretty girl. Can you explain? We hope you don’t mean that it is easy to make people laugh, coz we are yet to find one decent Lebanese stand-up comedian ;) Most of them think they are funny, but frankly they are not lol!

:) Well it's not easy at all to make people laugh or even smile. People who can do this are really gifted. As for what I said, a Lebanese policeman is a phenomenon :) How he treats people and "DOES HIS JOB", and the Lebanese girl is also quite a character :) I can spend a weekend just talking about her attitude, how she spends her standard day that usually ends at SKY BAR :) and that will be another weekend (don't get me wrong, not all the girls and the policemen are like this but the majority is and I am sure).
I believe that 60% of our Lebanese comedians are super good and funny and really know what people want and work very well on their texts. As for the other 40%, they think they're funny but they're NOT; no texts, no good choice of critics, and definitely NO GOOD DELIVERY, and for me that's the most important thing for actors in general.

You might have gotten your percentages mixed up a bit there, but we won’t argue with you ;) We cannot help but notice you have very interesting features. In French they say “une gueule”. How determinant do you think an actor’s physical attributes are in the roles he/she is offered? Has that helped you or was it a disadvantage?

When my friends and family will read this question they will answer it directly :)
They know me by "Joseph with the big nose" or "Joseph with the Afro hair" or "Joseph with the little weird belly"... Sure the physical attributes are necessary especially in comedy. I often make fun of myself, saying I was born simply a NOSE :) "yes" and then I grew up adding more features like big feet, a belly... With my nose I can do all kinds of funny facial expressions, so it's definitely an advantage.

We are not sure why, but we liked you more in the funny commercials and acting roles, much more than in the serious ones. What about you, how do you assess your work so far?

Some people don't know that for actors, drama is much easier than comedy. As a professional actor, I have to take all kind of roles. But my work so far explains it all :) I love comedy, it's really in my blood and I am really happy with my achievements till now.

Do you think you are taken less seriously as an actor (in comparison to others), given that your background is kids theater? Not so many have actually succeeded the cross-over, wouldn’t you agree?

I totally agree with you, that's why I took a decision in 2010, that starting 2011 I won’t be working with kids anymore. I believe that male kids’ animators can't stay long in this field. As for girls, that's a life time career like Chantal Goya for example.
As for the first part of your question, while zapping on local TVs in Lebanon, you see the same faces since 1999, but this year we actually did see new faces, so step by step we will see more of US, the young generation of Lebanese actors and actresses.

Where do you find yourself more? We noticed you still sometimes play ‘the clown’ on certain kids TV shows like on OTV. (In music videos for example)

CLOWN!!! I simply dream of being a CLOWN, because a clown is a really appreciated profession in some parts of the world but unfortunately not in Lebanon.
I am still doing dances (I call them "crazy signs") in the kids show KAZADOO shown on OTV, and that's the only continuous show I have now, and used to act in NATALOO on AL JADEED (New TV) (as NAJIB her annoying neighbor), I love both kids shows, TV series & specially movies, but as I said before,2011 will be the final step of the cross-over to more theater, movie, TV hosting and comic series.

The kids are surely going to feel so sad though! Anyway, we are approaching the end of the year 2010. If you look back, what actors, TV series, or movies etc...from the Arab World (including Lebanon) caught your attention this year? What about the most disappointing ones, and why?

I think this year was a success, I didn't watch too many series but I was always updated, and I really liked the series "Madame Carmen" (Actors & actresses, cinematography) & "Min Ajli Aynayha" (Actors & actresses, script) and no doubts the Syrian piece of art "Beb El hara". Syrians are taking GOOD control of the Arabic drama and they really deserve it for their good work.

Well I am working on a Sitcom with Film&Co and another funny educational show with the director Marc Boustany, and what I am sure of till now that the sitcom will see the light in 2011, and I am touring my short movie "CATHARSIS" based on woman's right in the Lebanese Film Festivals.

Good luck with all that then. We hope it gets the success you are hoping for. Thank you again for this interview, would you like to add anything else?

I would like to thank you for supporting Lebanese artists, and best of luck keep up the great work.


Joseph Azoury is an Actor, TV animator and Communication Artist.

Joseph was born in Jal el Dib Lebanon, on March 13th 1983, into a family sensitive to art and entertainment in general (His father, Sami Azoury, is also an actor, director and writer for plays and TV series). This is why since as early as 10, Joseph Azoury was encouraged to follow his passion and become an actor. He started off in the professional Lebanese kids theatre, and later on took basic psychology and social animation classes, parallelly working in kids animation before becoming a professional animator and trainer. He later studied Radio-TV.

Help us improve this page:   Correct or update the Joseph Azoury page